WE MATCH YOUR SALARY

Get the details on our Careers Page

Life is GREAT when YOU treat others the way YOU want others to treat YOU! 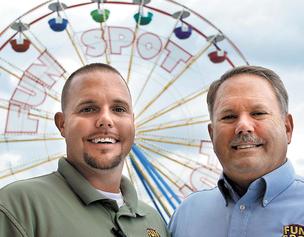 Fun Spot America Theme Parks is a family-owned business with a long history in our industry. Our Founder, John Arie, Sr has been a part of the entertainment park industry since 1969. John operated and ran several small tracks from 1969 through 1978.

In 1979, John opened Fun N Wheels on International Drive, which was and still is the heart of the tourist corridor in Orlando, Florida.  Fun N Wheels in Orlando was the first themed action park with multiple tracks, family rides, and an open-air arcade. It featured the world’s second slick track and central Florida’s first figure 8 bridge tracks. The concept was well-received by locals and tourists alike.

In 1988 John opened his second Fun N Wheels in Kissimmee, Florida, just minutes from Disney World. Both locations became a staple in the community and proved to be very successful. John sold the Fun N Wheels properties in 1988 and continued to manage the parks until 1991. In 1990 John opened the first Fun Spot in Myrtle Beach, South Carolina, and shortly after opened the Virginia Beach location. In 1994, John created the world’s first sprint track, delivering the best side-by-side racing excitement in a concession kart environment. John also developed aviation-inspired guardrails that provide the safest, most efficient, visually pleasing guardrail system in the industry.

In 1997 he moved the Fun Spot brand to Orlando and began construction of the Orlando park on the North end of International Drive, close to his original Fun N Wheels location. The Orlando park opened on December 24th, 1997, and introduced our patented design of multi-level tracks that became our signature.

The year 2017 also brought expansion outside of Florida when Fun Spot America acquired an existing park in Fayetteville, Georgia, and renamed it Fun Spot America Atlanta. The Atlanta location boasts our largest four-story go-kart track, The Samson. Standing at 40 feet tall and 1,800 feet long the track is Georgia’s first and only multi-level go-kart-track. Atlanta is also home to a new Ferris Wheel, Batting Cages, and more fun for the whole family.

With the continued support of our local community and a strong belief in the practicing of “The Golden Rule”, we hope to continue to grow and provide Safe-Clean-Fun for all.

Get the latest news, specials & deals!